Celebrating the 50th Anniversary of the March on Washington 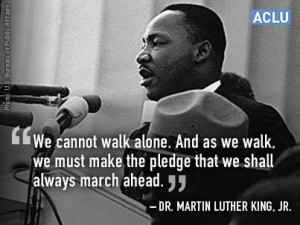 “We refuse to believe that the bank of justice is bankrupt. We refuse to believe that there are insufficient funds in the great vaults of opportunity of this nation. And so, we've come to cash this check, a check that will give us upon demand the riches of freedom and the security of justice.”
--Dr. Martin Luther King, Jr.
Wednesday, March 28th will mark the fiftieth anniversary of the day that more than 200,000 people converged on the National Mall to fight for civil and economic rights.  The landmark anniversary of the historic "March for Jobs and Freedom" is a reminder both of the promise of the civil rights era and of the many civil and economic rights that are still at risk in this country a half century later.
Since the March on Washington, the ACLU has been working to ensure that no one is denied his or her rights on the basis of race. In New Hampshire and throughout the country, we currently work to stop racial profiling, to end practices that push students of colors out of schools into the criminal justice system, and to repeal voting laws that disenfranchise minority communities. We are also work against overincarceration at a time when more Black people are incarcerated in the United States than at any time in our nation’s history.
And we still have much work to do if our country is to truly realize Rev. Dr. Martin Luther King, Jr.'s vision. We all have a responsibility to revive the urgency felt by the 1963 Marchers and to ensure that our society rises, in the words of Dr. King, “to the sunlit path of racial justice.”