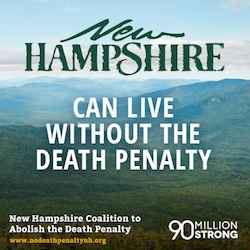 Yesterday, the New Hampshire House strongly passed a bill to repeal the death penalty in New Hampshire. The House voted 225-104 to end the unjust, costly, and inhumane practice.
Several members of the House spoke eloquently about the many reasons to support death penalty repeal in our state, including that: it forever deprives individuals of the opportunity to benefit from new evidence or laws, it has led to the killing of innocent people, it is expensive, and there is no empirical evidence that it has any deterrent value. Representative Renny Cushing, the prime sponsor of the bill, stated: “If we let those who kill turn us into killers, evil triumphs, violence triumphs and things just get worse.”
Next step: The bill, HB 2270, will go to the New Hampshire Senate. Call your Senator today and urge him or her to support repeal!