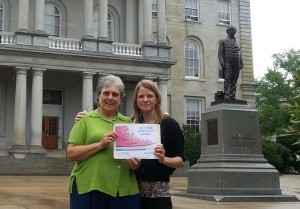 It seems as though there is a competition between states of who can legislate the most extreme violations on women’s health. Texas jumped to the top of that disturbing list last week, as legislators called a special session just to attempt to push a sweeping anti-abortion bill that would have blocked most of Texas from access to safe and legal abortion care into law.

People in the Lone Star State didn’t take this assault on women’s health quietly.  Thousands of women and men gathered to protest the package of bills that would  block women from getting the health care they need. Inside the Texas Legislature, courageous Senator Wendy Davis launched a 13 straight hour filibuster that led to the bill failing to gain final approval that night.
Today, women and men are demanding justice for all women in Texas, as Governor Rick Perry called a second special session of the Legislature to pass abortion restrictions.
Politicians around the country remain focused on banning abortion and attacking reproductive health care. Across the country, we must stand together against bills that set extremist precedent for other states to imitate. Texas’s situation is a serious and atrocious assault against women that demands action from all supporters of women’s full access to health care.
Abortion is a complicated issue, but the facts are simple: limiting access to safe abortions does not decrease the number of abortions performed, it just forces women to seek medical care that may be dangerous or illegal. Legislation that attacks women’s health and safety must be stopped immediately.  That's why the NHCLU has joined other advocates across the country in standing with Texas women in support of women's health.