The U.S. Constitution prohibits courts from jailing people for being too poor to pay their legal fines.  Yet this is happening in New Hampshire anyway.  This practice, which effectively creates debtors’ prisons in this state, is morally wrong.  It's also unconstitutional.
This week, the NHCLU secured the release of an indigent man named Richard Vaughan.  Mr. Vaughn was jailed on Tuesday, July 8, 2014 in Littleton Circuit Court for failing to pay a $895 fine -- a fine he simply had no ability to pay because he is poor.  Under the Circuit Court's order, he was scheduled to be jailed one day for each $50 of the fine, meaning that he would be jailed for 18 days (until July 26).  When he was jailed, he was not represented by counsel.
As explained in the NHCLU's Petition for Writ of Habeas Corpus, Mr. Vaughan, who is not on government assistance, has no money and is simply struggling to get by.  He has been out of work since May and has been looking for work ever since.  He has worked his whole life, is a hard worker, and has made substantial progress in his job search (including securing an interview the day before he was jailed).  As we argued, this progress would only be impeded by compelling him to spend over two weeks in jail.  Moreover, jailing him would waste county resources, as Mr. Vaughan is clearly not a threat to society.  On July 14, 2014, the Grafton County Superior Court released Mr. Vaughan for the reasons stated in the Petition. 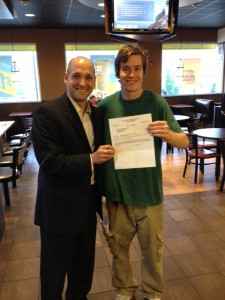 This is the third time in 6 months that the NHCLU has been forced to take immediate legal action to protect the rights of New Hampshire citizens who were jailed simply for being poor.  You can read about the other two cases here and here.  Being poor is not a crime in this country.  Incarcerating people who cannot afford to pay fines is not only cruel, but it takes a tremendous toll on precisely those families already struggling the most.
The law requires that courts hold hearings to determine defendants’ financial status before jailing them for failure to pay fines and fees, and defendants must be provided with lawyers for these hearings.  If a defendant cannot pay, the court must explore options other than jail.  U.S. Supreme Court precedent makes clear that local courts and jails should not function as debtors’ prisons.  Beyond the questions of legality, debtors’ prison practices make no financial sense since courts routinely spend more to jail defendants than they would recover in fines.